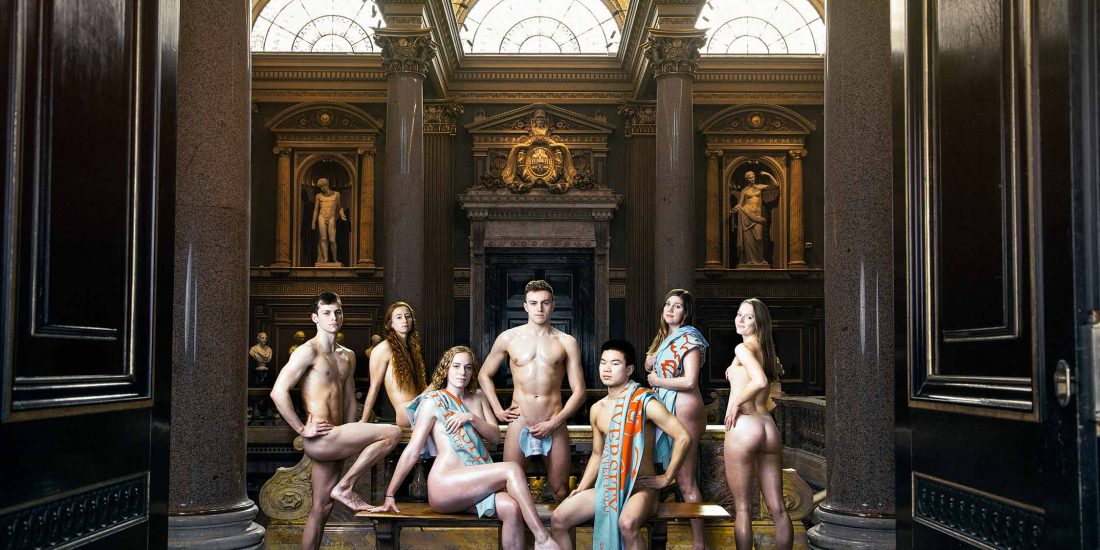 Back in February 2020 when the world was normal, I started a big University project.  Honoured to be chosen to shoot the 2021 Cambridge University Blues Naked Calendar, the project presented some big challenges, Covid19 being the real biggie.

Before The First Lockdown…

We completed the first few calendar shoots without social distancing in February and March.  They were all about group comradery and naked sports teams standing together having a jolly good time for charity!  Here’s some chaos from the calendar’s cover shoot with models from the swimming team at the Fitzwilliam Museum: 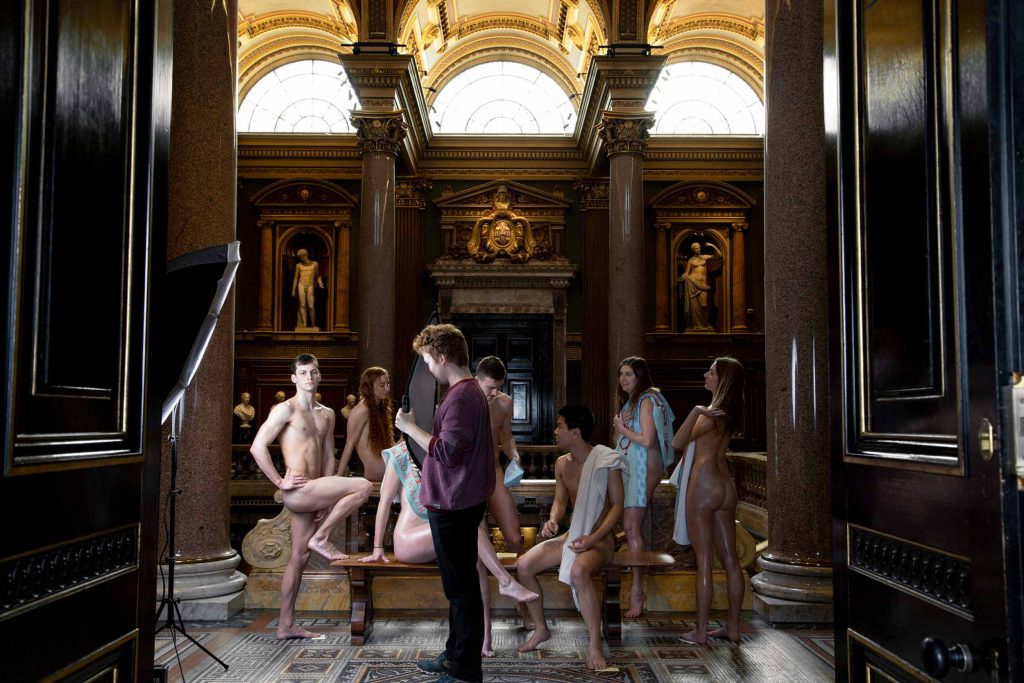 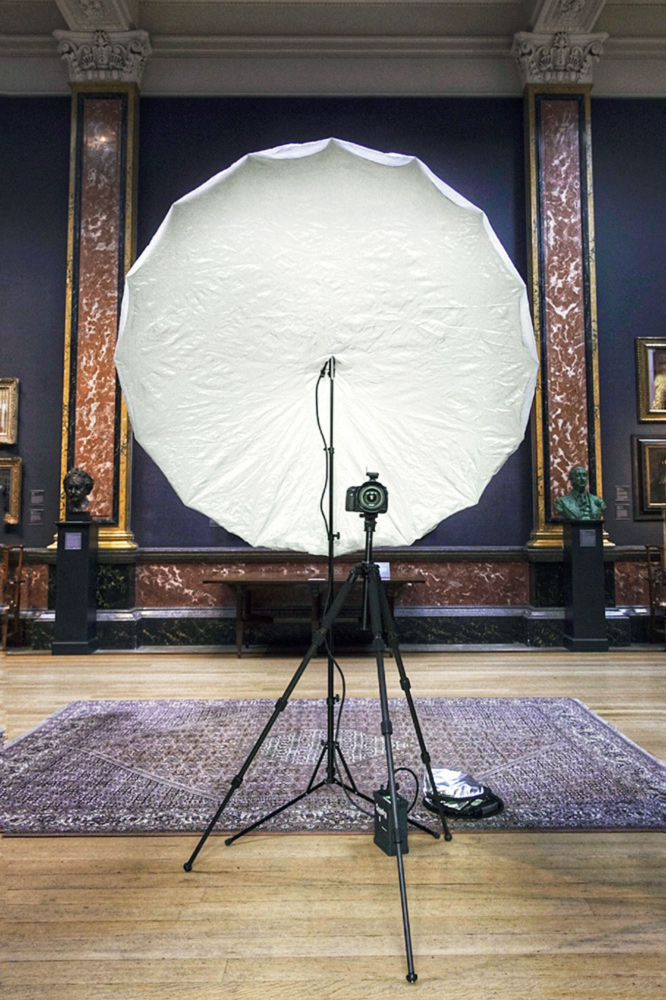 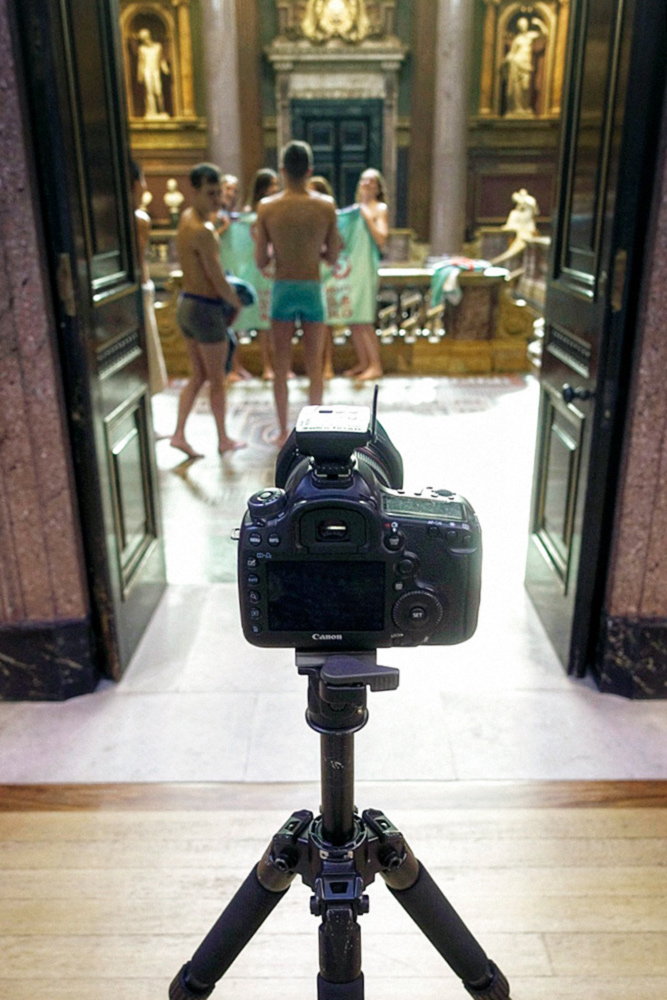 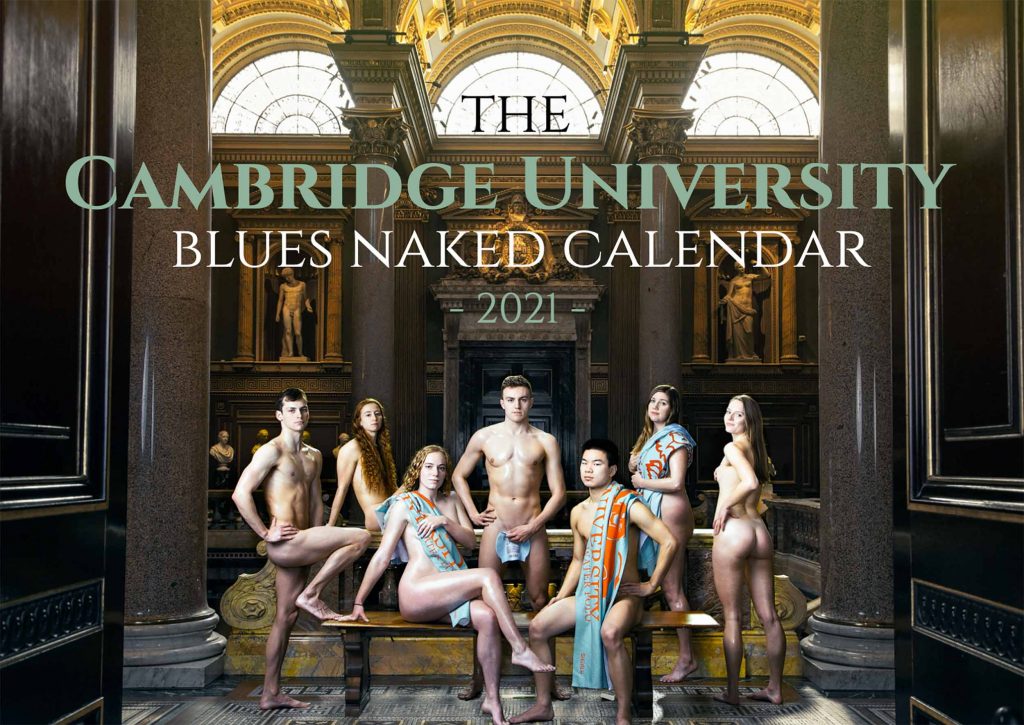 Two more shoots were ticked off the list, the water polo team at the Union debating chamber and the men’s volleyball team at the University classics department cast gallery: 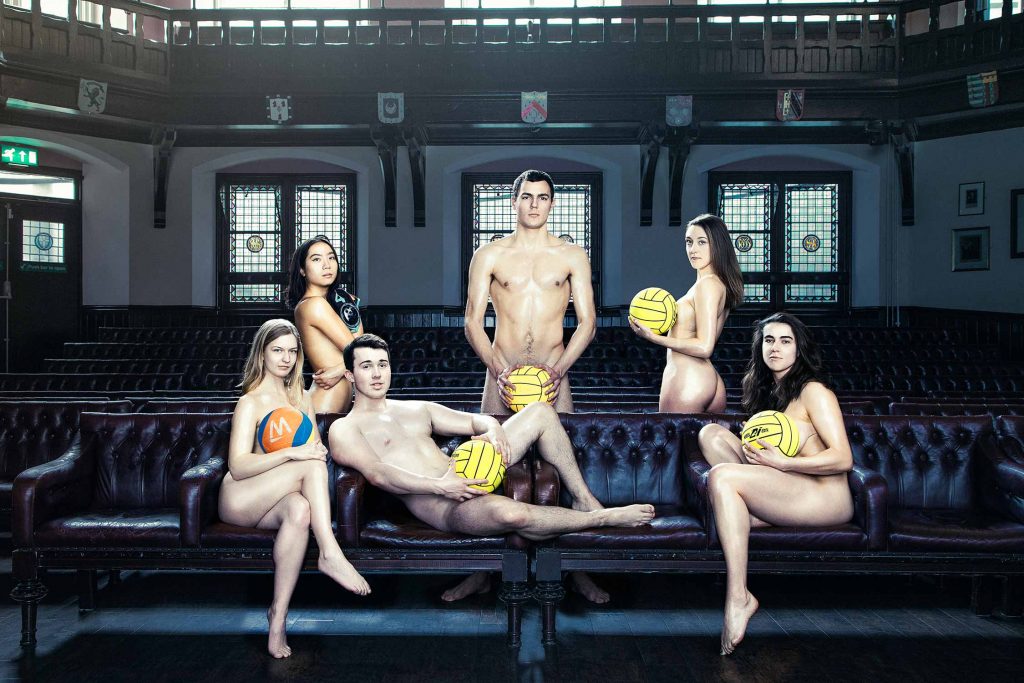 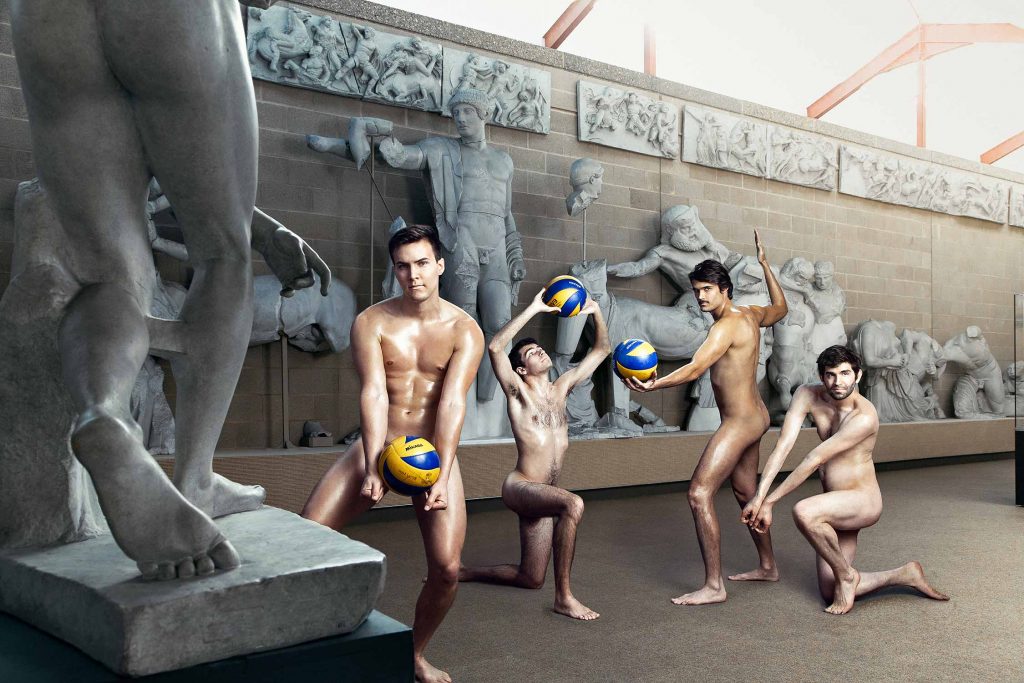 Then came lockdown.  The project was put on hold as students were sent home and the University shut down.  My work more generally stopped meaning I had plenty of time to work on my edit processes for the calendar!  I had already chosen to light people individually, planning to create composite final images.  All models were lit, shot and edited individually and placed back into the original scene.  This technique created the commercial advertising look I was after, but it became an essential element for the shoots that followed.

In a mad rush at the start of the University term and with a feeling new Covid restrictions were imminent, we pushed ahead to get the calendar wrapped.  University locations were limited and we ended up shooting in some unexpected, hidden gems.  We were also restricted initially to shooting outdoors, then to groups of four.  In the end, we shot anywhere we could find (there’s a long story about the Grantchester shoot involving Jeffrey Archer, a huge misunderstanding and some lucky paddle boarders… but I digress).  All remaining calendar shoots were completed under Covid restrictions and social distancing using the composite technique. 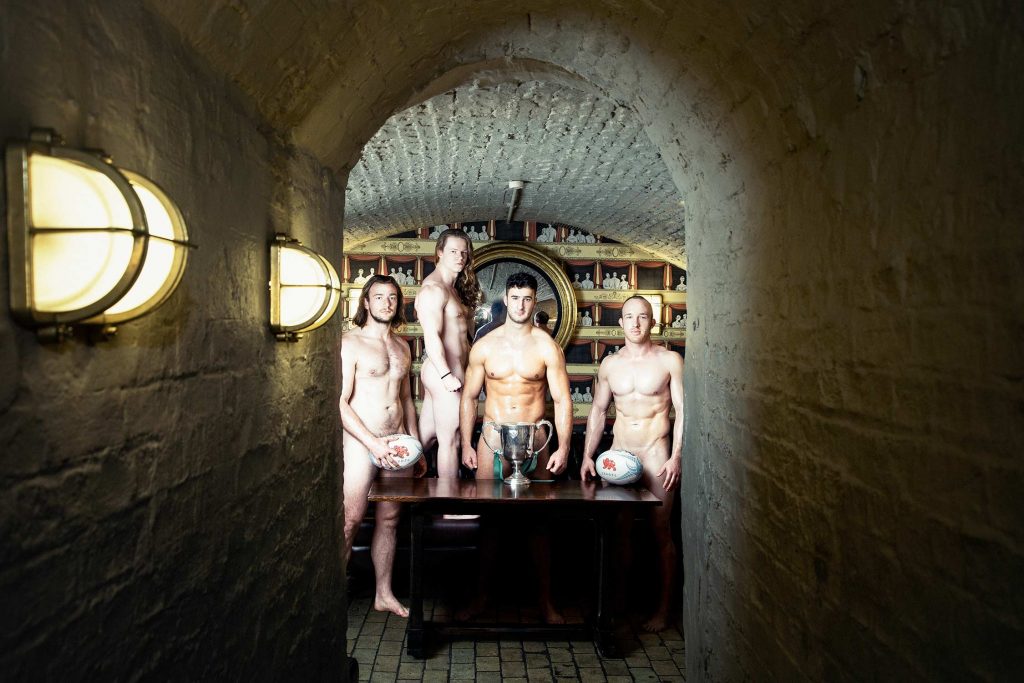 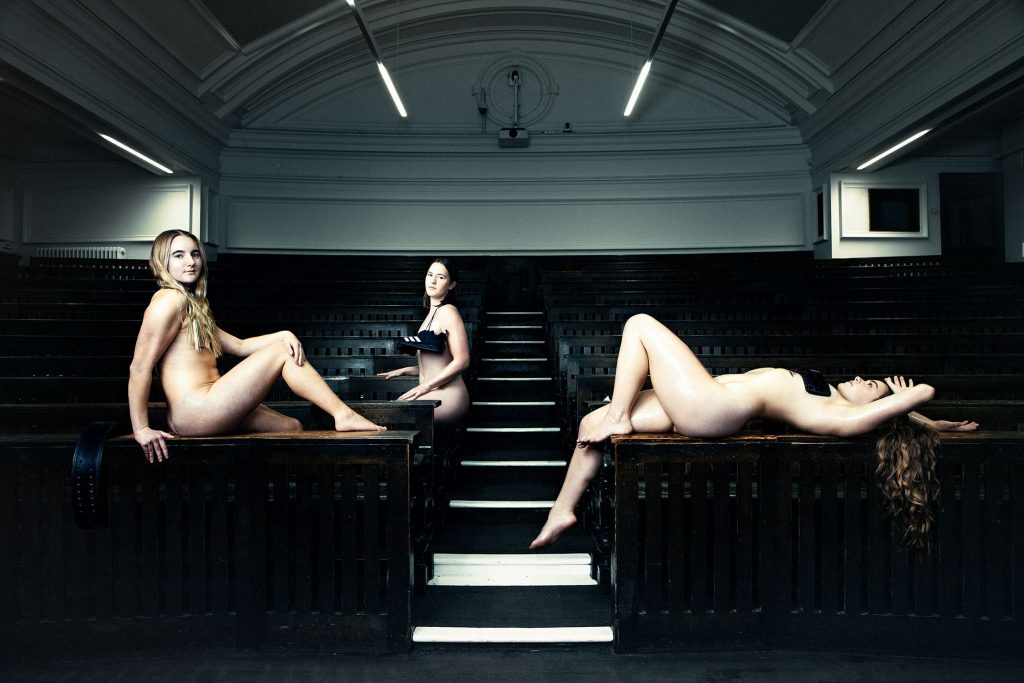 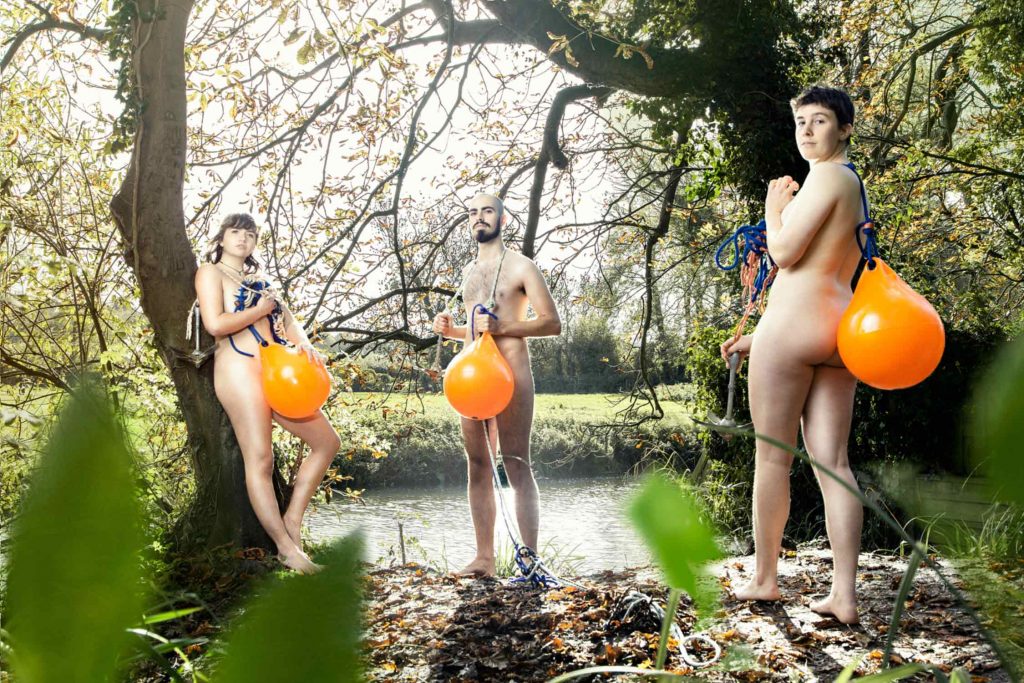 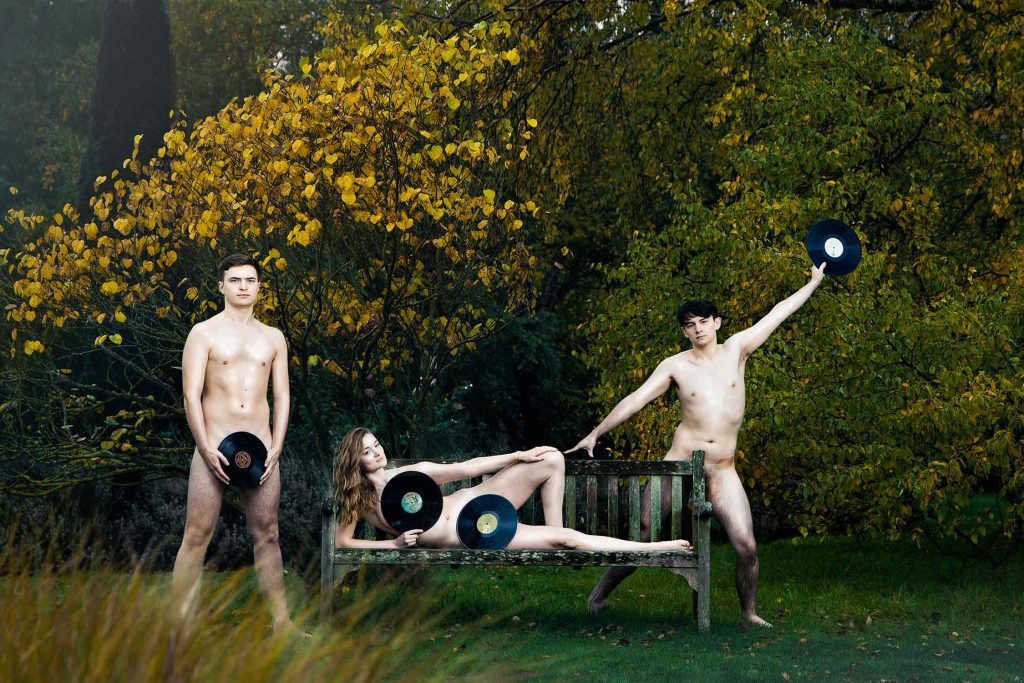 So, How Was It Done?

The following image is a real favourite featuring the women’s athletics team.  It was shot early one morning at the University Athletics track.  The weather provided the mood and the girls braved the cold!  Dan, the shoot organiser from Cambridge RAG (and my assistant), masked up to help with light and reflector placement.  I remained behind the camera directing.  I used two studio strobes to achieve the look.  One was for fill, firing from behind the camera, the other was inside a soft-lighter to light the models.  Dan’s reflector helped send a bit more light back into my subject’s faces.  Each girl was photographed separately and at a good social distance.  The final composite combined multiple images shot on location with my camera fixed to a tripod.  It put together as a digital composite, bit by bit.

This moody architectural landscape was my base image: 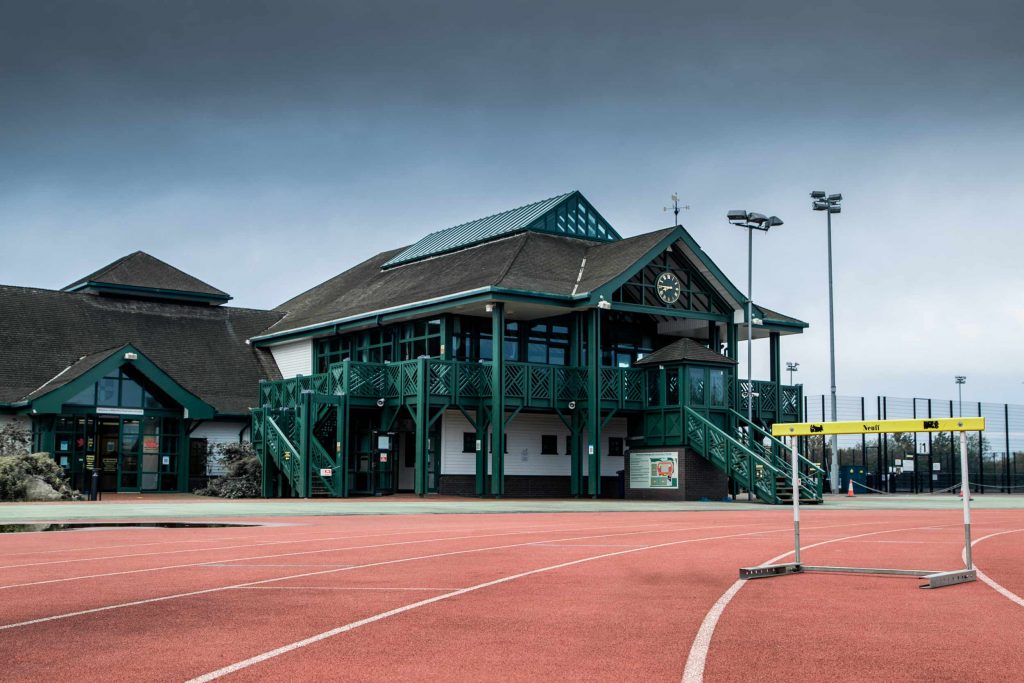 Models were photographed individually.  I later placed their images into the scene one by one: 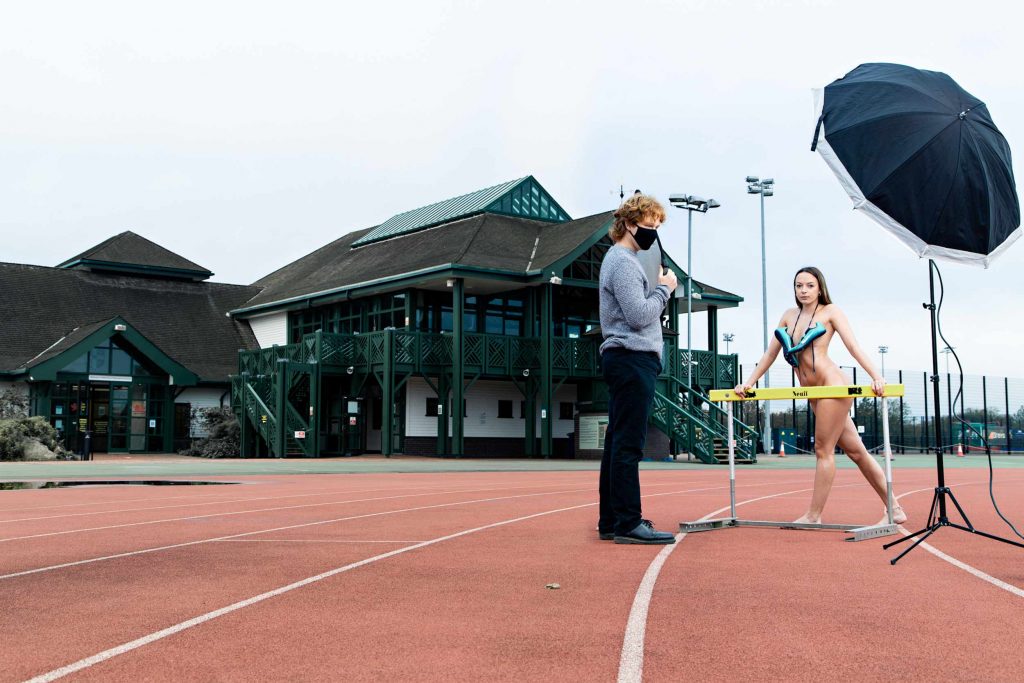 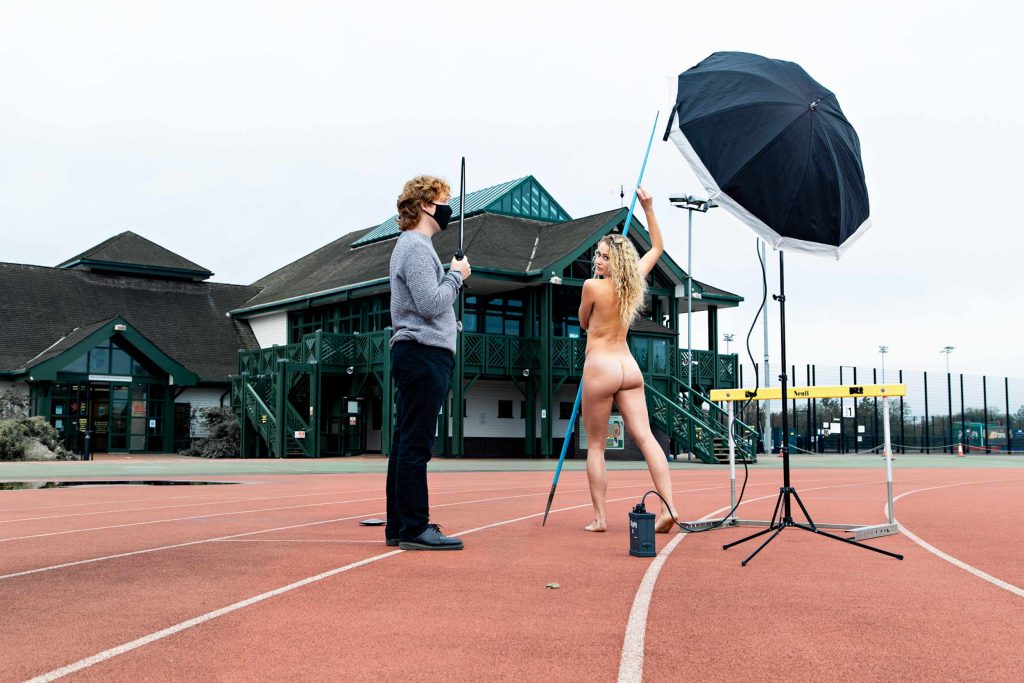 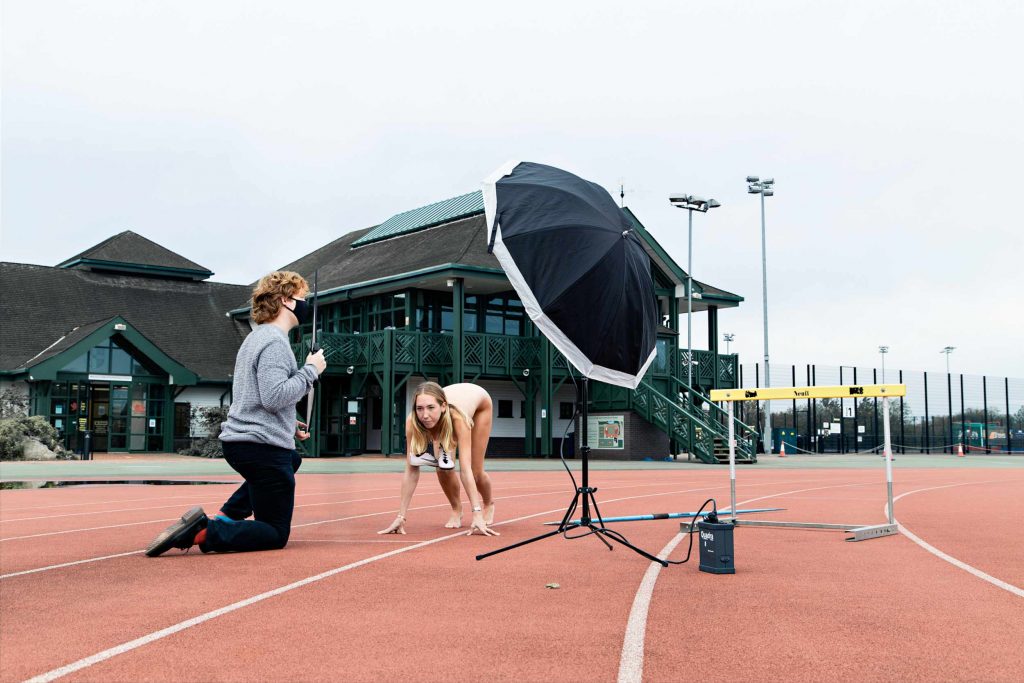 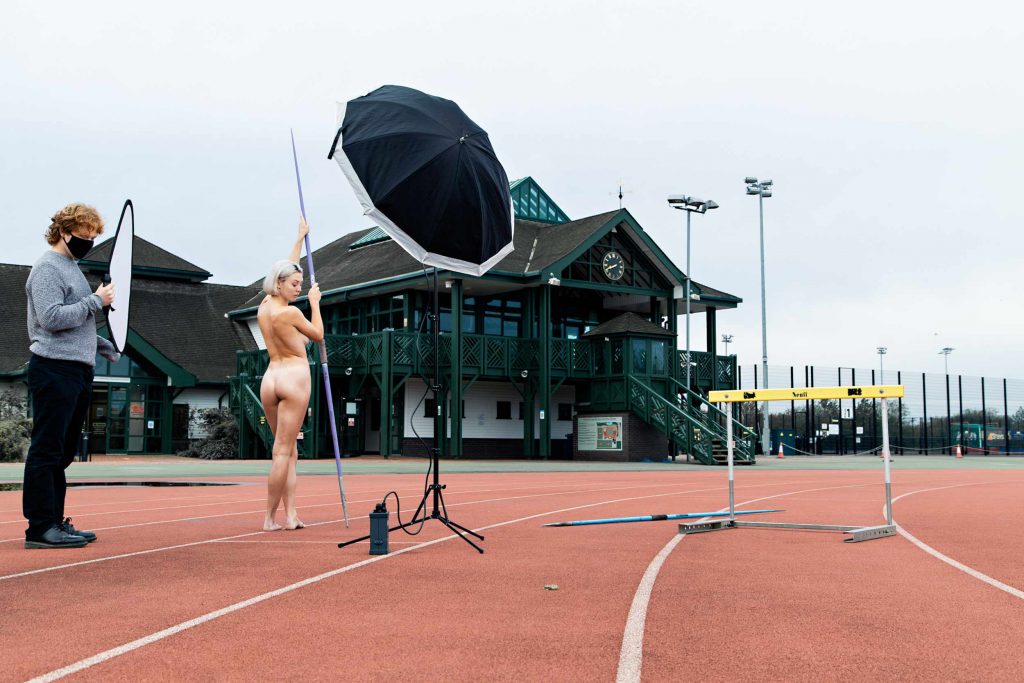 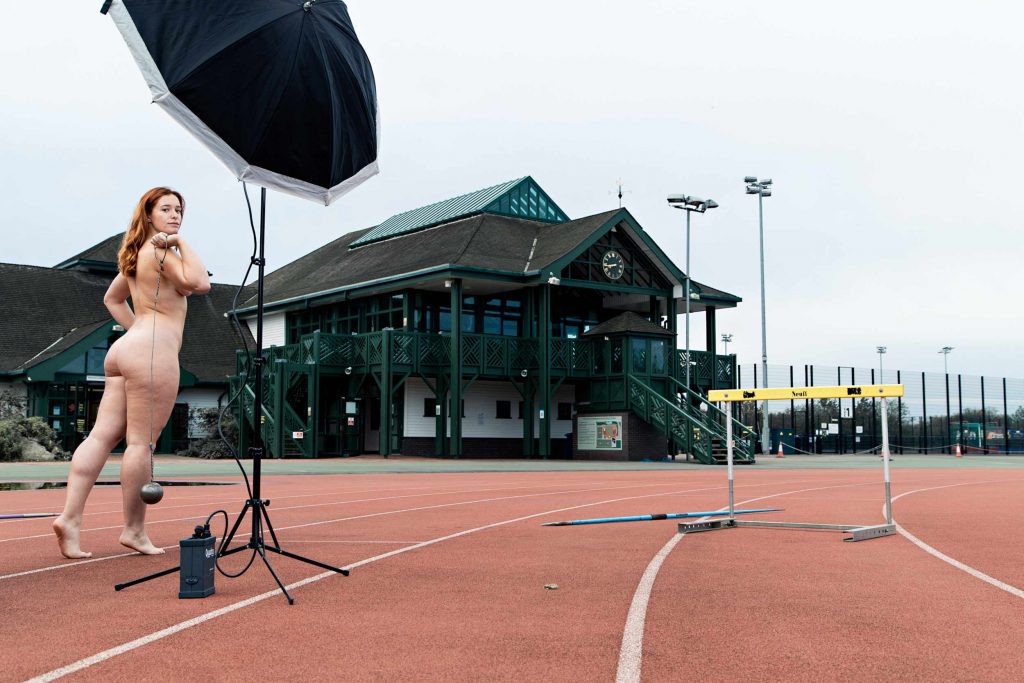 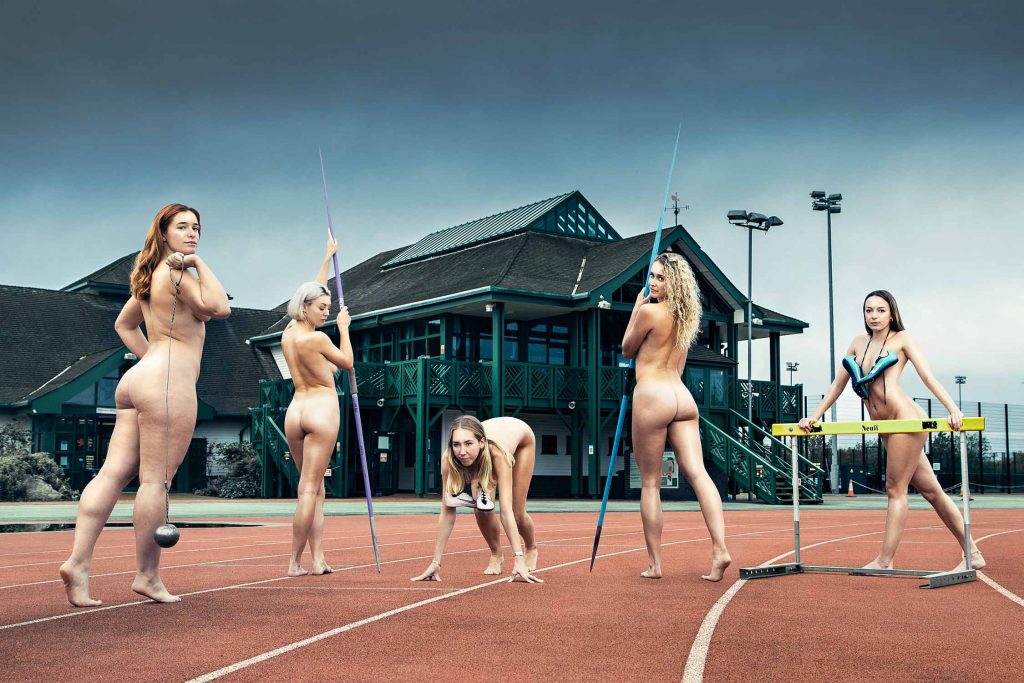 The Cambridge University Blues Naked Calendar 2021 is on sale now with all profits going to Doctors Without Borders.  It costs £10.

Buy it here in time for Christmas!   http://cambridgebluesnakedcalendar.com